"It’s all in a day’s work for this good knight!"
―Heroic Knight

The Heroic Knight has an unprinted light grey torso, with dark grey hands. His legs are light grey with a dark grey hip joint. Both of the legs have identical markings. His silver breastplate has plate armor markings. His shield has silver and white quarters, with a silver crown in the center. He has a new silver sword piece, and a light grey helmet with a visor and a white feather. 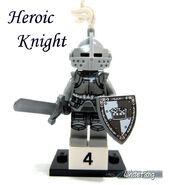 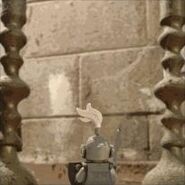 Retrieved from "https://lego.fandom.com/wiki/Heroic_Knight?oldid=1962554"
Community content is available under CC-BY-SA unless otherwise noted.