Hammerhead Warriors are Atlantis Minifigures released in 2011. They resemble hammerhead sharks, and have a dark-grey colour-scheme.

The Hammerhead Warrior has a tall dark-grey head with Atlantean markings around the top of the head and below the mouth, which actually a trans red head with printing of teeth. It has a rubber head, similar to the three original warriors. The eyes are black and are on either side of the head, on protruding parts resembling the head of a hammerhead shark. Two "fins" are on either side of the head, under the sides of the mouth. The body and legs have printing somewhat like the printing on the Shark Warrior. 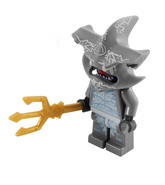 Behind the Hammerhead Warrior

Retrieved from "https://lego.fandom.com/wiki/Hammerhead_Warrior?oldid=1894486"
Community content is available under CC-BY-SA unless otherwise noted.