Grizzam is a Legends of Chima minifigure released in 2013. He is a member of the Gorilla tribe. He is one of the most mysterious characters in chima.

Not much is known of him. On the Legends of Chima Animated Series "episode 8" he is seen cheering for Dom de la Woosh. He is also seen chasing Cragger after he cut down the Tower Flower. 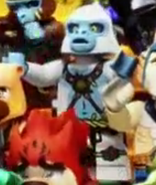