Greedo is a Classic Star Wars minifigure released in 2004 and 2014.

Greedo's dark turquoise head with black eyes has a mould first used for him and later used for Wald, Onaconda Farr and a rebel trooper in 75133 Rebels Battle Pack. His torso depicts a tan vest over a Dove Blue flightsuit. His arms and legs are same colour, and he has tan ribbing printed on his arms. Greedo's hands are dark turquoise like his head, and he has a reddish brown waist depicting his belt.

Greedo's 2014 redesign has a Sand Green head with blue eyes. His torso depicts a dark orange vest which covers a blue shirt. His arms are also blue sleeves going with his shirt. His hips are a belt and his legs are a light blue with some of his belt on it as well.

In The Video Games

Greedo appears in three Star Wars video games. He has grenades and a blaster as his weaponry, and has the ability to use a grappling hook in certain places. He also appeared in LEGO Star Wars: The Complete Saga in the mission "Bounty Hunter pursuit", where he can be seen running away from Zam Wesell's speeder as it was about to crash. In all three games, he has the ability to open up bounty hunter panels.

Greedo was a Rodian bounty hunter who lived on Tatooine and worked for Jabba the Hutt. During the Clone Wars he kidnapped Chairman Papanoida's daughters. They were rescued, but Greedo was long gone by the time the Jedi got to Nute Gunray, who had hired Greedo to kidnap them. In 0 ABY he was killed by the smuggler Han Solo in a Mos Eisley Cantina when Solo didn't have the money he wanted to take from him. When he was little he was born to a famous bounty hunter, Greedo the Elder, who was brutally slaughtered by a rival. 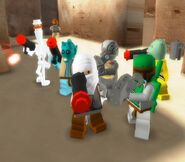 Greedo in LEGO Star Wars II: The Original Trilogy, amongst the other bounty hunters 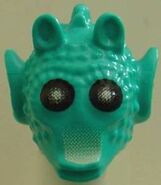