"To defeat an enemy, you must know them."
―Thrawn plans to defeat the Rebels 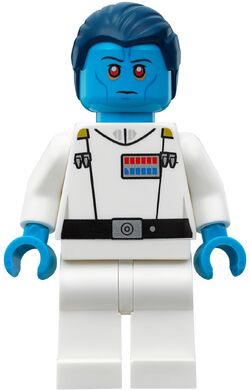 Grand Admiral Thrawn is a Star Wars Minifigure. He was first released in 2017.

Thrawn was originally introduced in the Star Wars Legends continuity following the destruction of the second Death Star and the accompanying deaths of The Emperor and Darth Vader. He would be one of many Imperial officers-and arguably the most effective and dangerous-to attempt to rally the remnants of the Empire following this defeat. The New Republic succeeded in thwarting him, however, and Thrawn was killed by his own bodyguard, a member of a race of beings whom Thrawn had unwittingly tricked into following him after contributing to a disaster on their home planet. Despite his demise, the effects of Thrawn's brief reign would be felt for decades to come.

Thrawn was later reintroduced into the Star Wars canon in Star Wars Rebels, an animated show set years before the events of A New Hope, in which he is once again a high-ranking Imperial officer. In this incarnation, Thrawn is called upon by Governor Arihnda Pryce to deal with the rebel forces that included the crew under Hera Syndulla. He is later defeated by Ezra Bridger.