" Not Happy!"
― Gorzan (After Being Frozen in his mech)

In The Legends of Chima he is first seen playing hide and seek with Worriz, Cragger, Eris, Laval, and Skinnet. He then later on when Cragger is chasing Laval he sees them going into the Falling Jungle and he says "That place is crazy."

In The Great Story, Gorzan competes in the Joust of Jungle Judgement. He is defeated by Laval in the first round, screaming "BUMMER!!!!" when he falls off of his Speedor.

In The Warrior Within he G'Loona and Grumlo see a flower on the road and make a detour many people go by but when the Ravens come Razar plucks the flower and tries to sell it to Gorzan, Gorzan gets mad and pushes Razar. Next the Wolves come in their Pack Trackers and they try to attack but Gorzan gets in his Gorilla Striker. They fight and a piece of metal falls on the flower and it droops he then puts it in a field with other flowers.

In Market Day, Gorzan competes in the Trail of Terrible Torture, but is distracted and crashes.

In The Hundred Year Moon, Gorzan discovers that G'Loona has gone missing on the night the Wolves go on a rampage. Gorzan explains this to Laval, Lagravis, and Eris. Laval and Eris agree to help him, and then Gorzan organizes all of the Gorilla Tribe to pilot their Gorilla mechs to fight off the wolves, but it goes horribly wrong.

In For Chima!, he protects Laval and Eris as they run away from the Crocodile, Wolf and Rhino army.

In A Tangled Web he helps the other heroes free the Gorilla Legend, he's sad and depressed to see the "Legend Dude" be imprisoned. He helps Laval, Cragger, Razar, and Bladvic disguise Rogon's truck as a fly to distract the spiders long enough for the Legend Beast to escape. In the fight he Chis up and rescues the Legend Beast. He calls the legend beast "The Great Mellow". They defeat the spiders with their combined strength.

Gorillas tend to be super strong but also super mellow. This is even more true for Gorzan, one of the most sensitive creatures in all of CHIMA. He is incredibly powerful and can efficiently crush most enemies, but he will later anguish over “the poor flowers” he stepped on during the battle. Gorzan sometimes cares a little too much about the little things – he’d rather pick the nits out of your fur or offer you mellow advice than help you in battle. He is overly-sentimental and prone to staring wistfully at flowers. He sometimes feels another creature’s pain before they even realize they had any pain. He’s THAT sensitive. Be aware when greeting him – he gives everyone a big, loving, (and inadvertently painful) hug whenever he sees them. So wear some extra armor if you’re hanging out with him socially. Gorzan’s just a great guy – and a wildly-powerful fighter when his warrior instincts kick in – but he can sometimes be a little high maintenance. 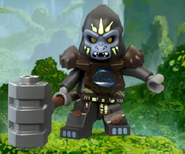 Gorzan shown in Legends of Chima: The Animated Series 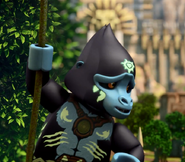 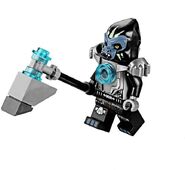 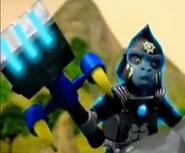 Gorzan's 2014 variant in Legends of Chima: The Animated Series

Gorzan in LEGO Dimensions
Add a photo to this gallery