See also 75112 General Grievous.
"Jedi! You are surrounded, your armies are decimated! Make peace with the Force for this is your final hour. But now that I - General Grievous am not completely without mercy. I will grant you a warriors death. Prepare!"
―Grievous's first dialog to the Jedi.

General Grievous is a Star Wars minifigure based on the character of the same name. Grievous has currently appeared in six sets with two different variations, his most recent appearance being in 2014.

Grievous is a major character in the Star Wars theme, appearing in Star Wars: The Revenge of the Sith and the Clone Wars sub-theme. The minifigure has a styled head, body, four droid arms and a set of droid legs; the latter two were parts identical in design to Battle Droid parts, with a white colour instead of tan.

However, in 8095 General Grievous' Starfighter, LEGO altered the design so that Grievous resembles his appearance in the series, giving him a neck that extends horizontally from his body, and a new, less mechanical-looking body. The head is new, and has paint applications to the face and eyes. Grievous is also given new legs and arms, and his decoration is somewhat peach-coloured.

Grievous had four lightsabers in both sets that included the General's initial incarnation (two green, two blue), and in 7656 General Grievous' Starfighter, and also came with a gun. Grievous even has his own droid bodyguards, also known as MagnaGuards, which appear in the sets 7673 MagnaGuard Starfighter and 7752 Count Dooku's Solar Sailer.

A two-part video on the LEGO Star Wars website named The Quest for R2-D2 shows a slight variation of the old General Grievous figure, including black arm and leg joints, a redesigned cape from 7255 General Grievous Chase, and a slightly yellow-tan tinge to his armour. The colouration for his armour carried on to the Clone Wars line.

Grievous was once a Kaleesh warrior who was engineered for Count Dooku's purposes before the Battle of Geonosis, in preparation of the Clone Wars.

Before his transformation into a cyborg, Dooku had Grievous's shuttle crash, leaving him barely alive with near-fatal injuries. Count Dooku then offered him a new existence and was transformed. Grievous then took up position as General of the Confederate droid army, and became Dooku's right-hand henchman and was trained by Dooku himself in the seven classic art forms of lightsaber dueling. He usually collected the lightsabers of the Jedi he killed as trophies, as he had a great hatred for Jedi. In 22 BBY, Grievous, in his final major act, infiltrated the Senate building and captured Chancellor Palpatine, taking him prisoner aboard his flagship, the Invisible Hand.

In the opening events of the Battle of Coruscant, Jedi Knights Obi-Wan Kenobi and Anakin Skywalker sucessfully rescued the Chancellor from Grievous' hands, and the cowardly General fled from his dying flagship to the world of Utapau. Obi-Wan pursued him to Utapau and confronted Grievous. Ordering his army of droids to stand down, Grievous challenged the Jedi Knight for a duel to the death. Grievous utilised all four of his arms, and first attacked using his lightsaber-buzzsaw technique. Obi-Wan was able to survive this attack, and sliced the hands from Grievous' lower arms. Grievous then fled in his personal wheelbike.

Kenobi chased him through the city streets on Utapaun lizard-back before finally engaging him again on a landing platform. Obi-Wan was able to disarm Grievous, but the general used his cybernetic implants to pummel him. Kenobi was able to pull apart a section of his armour, revealing his internal organs. Obi-Wan tried to trip him, but the metal was too hard for his leg, and Grievous threw him to the edge of the platform. As Grievous was about to strike Obi-Wan with the electrostaff, Obi-Wan used the Force to summon the blaster towards him. He then killed the general by firing multiple blaster shots into his now-exposed internal organs, igniting the flammable liquids and causing him to explode. His armoured shell remained untouched while Obi-Wan stole his starfighter.

Before a cyborg, Grievous was a Kaleesh warlord from the planet Kalee, Grievous was named Qymaen jai Sheelal. During this time, the warlord had toppled nations, slain legends, and killed kings. The Jedi at this time were known to kill many of Qymaen's people which caused him to hate the Jedi.

Qymaen, now Grievous, was allied with Count Dooku of Serenno. He never trusted him fully, believing that the new Confederacy would help end the Jedi for wrong actions. Grievous claimed to have chosen to be rebuilt and have portions of his body replaced with cybernetics. As a cyborg, Grievous changed his personality, becoming heroic. He became the General of the Separatist Droid Army. He is a cyborg who liked using droids and became the leader of the most powerful droid army the Galaxy has ever seen.

Grievous appeared in LEGO Star Wars: The Video Game and LEGO Star Wars: The Complete Saga, both appearances based upon his original variant. Instead of dying after being shot several times in the chest by his own blaster, he died after he was shot once by Commander Cody's gun, after killing him, and his head came off. His in-game appearance has non-LEGO eyes and skin that can be seen up close in a cut-scene, leaving only his droid and armour parts with a typically LEGO appearance. His cape is also dual coloured. He has an appearance in LEGO Star Wars III: The Clone Wars, based upon his redesigned minifigure. 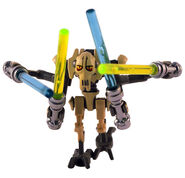 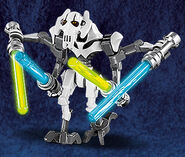