Frank Honey is the tritagonist in LEGO City Undercover. He is voiced by Trevor White.

Frank has orange slicked-back hair in a new mould. He has a large smile and wears a black police uniform with a white undershirt and a dark blue tie. The uniform has gold buttons and a badge of the same colour.

Frank Honey was a low-ranking police officer in the LEGO City Police Department, serving under Marion Dunby. His parents were rich and owned The Honey Hotel in Paradise Sands. Frank was a huge fan of Chase McCain, having heard about him from Ellie Phillips. He also wanted to show Ellie that he could be trusted. Frank often unwittingly annoyed his acquaintances, as evidenced when he constantly dogged Chase McCain, chattering on and offering to do odd - and often unnecessary - jobs for him.[source?] He is first seen at the police station carrying doughnuts for the the chief. 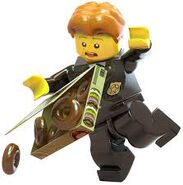 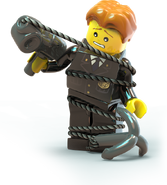 Frank with a grapple gun

Frank Honey in LEGO Dimensions
Add a photo to this gallery

Retrieved from "https://lego.fandom.com/wiki/Frank_Honey?oldid=1903743"
Community content is available under CC-BY-SA unless otherwise noted.