Fifth Brother is a Star Wars-themed minifigure released in 2016.

Fifth Brother has a gray disk shaped plate piece on his head similar to Embo's. He has an angry face with red eyes and light gray skin. His armour piece is black with a white collar and Imperial insignia on each shoulder and a gray torso and pants.

Fifth Brother was the designation used by a gray-skinned humanoid male Inquisitor of the Galactic Empire several years before the Battle of Yavin. On the orders of the Emperor, Darth Sidious, the Fifth Brother was dispatched by the Sith Lord Darth Vader to hunt the growing rebellion against the Empire. He later perished by the hands of former Sith Lord Darth Maul on Malachor. 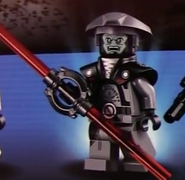