Fenrir Greyback is a Harry Potter minifigure introduced in 2010.

The Greyback minifigure wears a black suit, black pants, a belt, and a gray shirt which parts to show his hairy, werewolf-chest. His face is covered with matted fur, whiskers and bared teeth in a savage grin. He has slicked back brown hair. He has silver eyes with white pupils. In the books his character is said to have smelled of "dirt, sweat, and blood".

Greyback, unlike other werewolves, is savage on bloodthirsty, even biting humans in the day without the full moon. He bit Remus Lupin when he was a child and was therefore responsible for Lupin's transformation into a werewolf. He also attacked Bill Weasley, but not on a full moon so Bill was not completely infected.

He and a group of Snatchers kidnapped Mr. Ollivander, the wand-maker, Griphook, and Luna Lovegood in Harry Potter and the Deathly Hallows. Even though he was unofficially considered a Death Eater because he hunted down and turned in enemies of Voldemort, he never got the Dark Mark branded on his arm as he was never part of Voldemort's inner circle.

During the Battle of Hogwarts, Hermione Granger used a spell to blast him away from Lavender Brown (who he had killed) as the werewolf sunk his teeth into her throat. He was hit on head with a crystal ball from Professor Trelawney. He escaped and dueled Neville Longbottom, Ron Weasley, and another student, who eventually defeated him.

Greyback at the Toy Fair 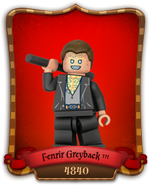 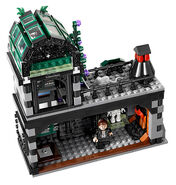 Fenrir Greyback in Borgin and Burkes in 10217 Diagon Alley 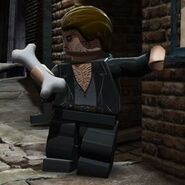 In the video game
Add a photo to this gallery