Faramir is a character that appears in LEGO The Lord of the Rings: The Video Game.

Faramir was the brother of Boromir, husband of Éowyn, and son of Denethor, Steward of Gondor. Faramir was a Captain of Gondor, fighting the Mordor Orcs in Osgilitath. He held Frodo, Sam, and Gollum captive but eventually released them, warning Frodo of Gollum's evil ways. Later on he was almost burned alive by his father, Denethor, but saved by the quick action of Pippin and Gandalf. 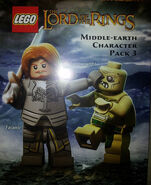 Gondor Armor
Add a photo to this gallery