Fíli minifigure has short brown legs and a brown torso piece. The torso has printing present on the front, depicting a brown quiver strap with various silver buckles. He also has a brown jacket with a lot of fur on the neckline down throught the torso and 2 brown belts with more silver buckles. The hands of the torso are flesh-coloured, his headpiece is of the same colour. The headpiece features black eyes with white pupils, thin blonde eyebrows, a blonde beard is present and dark skin colour for the outlining of facial features. He has a new hair piece it's long wavy blonde hair that's tucked back indentical to Thorin Oakenshield's hair, which is a new mould. Fili's mouth has an angered expression showing his teeth. Fili also comes with other accessories- two back to back Swords and a brown Quiver. As a microfigure, Kili was released in the game 3920 The Hobbit: An Unexpected Journey. It is a lighter tan, with face and a blonde beard on the front of the head area and some blonde hair, and a brown strap with a brown jacket and some fur is printed on the body which also continues a little onto the legs.

As the second youngest Dwarf, Fíli had the sharpest eyes and was often sent scouting or searching with his brother. They were the ones who found the goblin cave in the Misty Mountains. Fíli hooked the boat on the other side of the Enchanted river in Mirkwood. They scouted Ravenhill and the Front Gate with Balin and Bilbo Baggins. They also found the Lonely Mountain (Erebor)'s secret door with Bilbo. Kíli and Fíli were the two most active Dwarves of Thorin's company, and apart from Balin and possibly Bombur, they appeared more frequently as "individual" characters than the rest of Thorin's companions, who were most often named only in "group" references to the entire company.

Fíli was part of Thorin's group to kill Azog at Ravenhill. Upon arriving at Ravenhill killed, the dwarf was killed by Azog. 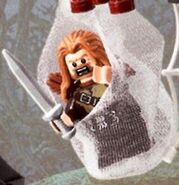 A Second CGI of Fili

Dean O'Gorman with his LEGO counterpart

O'Gorman at the Zurich premiere of The Hobbit: The Desolation of Smaug with the Fíli minifigure
Add a photo to this gallery
view · talk · edit Middle-Earth minifigures
Retrieved from "https://lego.fandom.com/wiki/F%C3%ADli?oldid=1851049"
Community content is available under CC-BY-SA unless otherwise noted.