"Trespass not in the secret glades of the Elves!"
―Elf

The Elf is a Collectable Minifigure released in 2011 from 8803 Minifigures Series 3. He comes with a shield, a cape, and a bow and arrow. He also comes with a newly moulded hairpiece which also appeared in Series 4 on the Werewolf in brown. The Elf was one of five minifigures chosen for a re-release within the set 850458 VIP Top 5 Boxed Minifigures.

He is made from a new hair piece, head, cape, torso, and legs, and comes with a bow, a shield, and a display stand.

The Elf comes with a new slick-back hairpiece. It is a blonde colour with on each side yellow ears. His face features a stern expression with the general colour of the head being yellow. He also comes with a dark green cape. His torso is coloured earth green with a armour printing on it. The arms are a lighter green. His legs are also earth green with the same armour printing as his torso. The Elf also comes with a bow and arrow and also a new sheild piece. Printed on the shield is an elk. The Elf like other collectable minifigures comes with a black display stand. 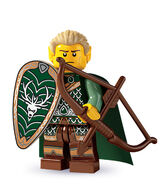 CGI of the elf

The Elf as the logo on LEGO.com

The Elf from different angles
Add a photo to this gallery

Retrieved from "https://lego.fandom.com/wiki/Elf?oldid=1962122"
Community content is available under CC-BY-SA unless otherwise noted.