The Dwarf King is the leader of the Castle Dwarves. He first appeared in 2008. The dwarf king wears a golden version of the winged dwarf helmet.

The Dwarf King wears a golden winged dwarf helmet and has a dark brown beard that covers half of his (generic) face and almost his whole torso, having three braids on the back and two on the front. The torso underneath is dark grey with a Viking armor design and dark red arms. The Dwarf King has short legs clothed in brown pants. He carries a golden goblet and a ruby.

As the name suggests, the Dwarf King is the king of the dwarves. He is seen watching the work in the mines from a balcony.

The dwarf in the Castle Advent Calendar wears a golden winged helmet like the Dwarf King and also has the same beard, however, he also comes with mining tools and has a different face, so it is unclear whether he is supposed to be the same character. The minifigure in the Battle Pack also looks slightly different from the one in the Dwarf Mine. 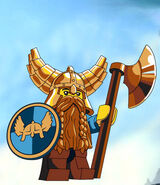 Retrieved from "https://lego.fandom.com/wiki/Dwarf_King?oldid=1851035"
Community content is available under CC-BY-SA unless otherwise noted.