Duke Huckleberry is one of the characters in the video game LEGO City Undercover. Duke is also chief of the LEGO City Forest Police.

Duke Huckleberry has a Forest Police torso with full blue pants and the Forest Police hat. He has a southern drawl and a mooustache. 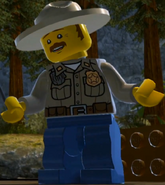 Retrieved from "https://lego.fandom.com/wiki/Duke_Huckleberry?oldid=1907336"
Community content is available under CC-BY-SA unless otherwise noted.