The Dragon is a mythical Animal Minifigure which was originally released in 1993. Several versions of the dragon have been released since its debut. A dragon named Burno was planned in the early stages of LEGO Universe.

Dragons were first introduced in the 1993 Dragon Masters subtheme of Castle. These first dragons were green with red wings and only three dragons were initially available in this subtheme. With the addition of the 1997 Fright Knights subtheme dragons were reintroduced, but this time some of them were black with transparent red wings. Ironically, this theme also introduced black versions of the dragon wings, but the official Fright Knights designs did not use them on dragons themselves; instead placing them upon various vehicles. Naturally, the included parts could be rearranged to build a pure-black dragon. After the Fright Knights were discontinued in 1998 dragons were not seen again, save the minor appearance in the game LEGO Racers (Game) and Knights' Kingdom subtheme in 2000. Those dragons consisted of a body piece with fixed legs and movable arms. The separate pieces that made up the head and the tail were later reused as parts of the crocodile and the arms reappeared as parts of several dinosaurs in Studios, Dino Island and Dinosaurs.

The 2003 Adventurers set 7419 Dragon Fortress from the Orient Expedition sub-theme, was the first and only set to included an embellished black Oriental style dragon, which utilized two pieces exclusive to this set: an embellished serpent-like tail piece, and a new gold headpiece.

In 2007 a new dragon model was introduced for the new Castle theme. The dragons were available in either black, dark red or green. The wings were the same as in the Viking dragons. Unlike the previous dragons this new version had a separate pieces for the neck and legs. The arms and head were also new pieces. The base of the tail used the same pieces from Dinosaurs and the tip was the same one used on the Hungarian Horntail from 2005. A red version of this dragon was introduced in Castle (2013) in 70403 Dragon Mountain.

There were no new dragons until 2005, when several different dragon figures were included in sets of the new Vikings line. The dragons were made up of various assembled pieces, much like a typical LEGO model, instead of being a standard minifigure. Those dragons were slightly different from each other and had only some elements in common, such as the head, which was only available in Vikings sets (and one Knights' Kingdom II set from 2008, but merely as an ornament and not as part of a dragon), the wings, which were also used in later dragon models, and the tail pieces, which made their debut as dinosaur tails in 2001. The legs and arms of these creatures were fully movable.

2005 also saw the release of 4767 Harry and the Hungarian Horntail which included a new dragon figure. This dragon, the Hungarian Horntail, consisted of a new armless body piece with fixed legs and a head exclusive to this set. The wings were the same as in the Vikings dragons, save the color. The tail tip was a new piece that was later reused in the new version of the Castle dragon.

In The LEGO Movie, the red 2.5 version of the dragon is seen in Middle Zealand. It nearly collided with the Batmobile, but missed. It could be seen with some Lion Knights roasting a Pig on a spit as the Batmobile ascended the rainbow leading to Cloud Cuckoo Land. It was soon seen stacking bricks in the background with the Knights. The Dragon can finally be seen during the Battle of Bricksburg.

In 2014 the new non-minifigure dragon was introduced in the new Minecraft theme for two sub series for minifigure and micro mob series. They are in types of classes of figures. One is micro mob and the non-minifigure. They have various pieces and a lot of special features like movable wings.

This series introduces dragons that combine a few specialized parts with standard brick-built elements. They all have names and are paired to certain humanoid characters.

All Legoland theme parks throughout the world feature a rollercoaster attraction called The Dragon or "Dragon quest". The ride features a rollercoaster train modeled to resemble the original green LEGO dragon animal minifigure. The attraction starts out as a "dark ride" type experience traveling indoors past life sized moving LEGO models and figures, before ending with an outdoor rollercoaster style experience including sharp turns and drops. 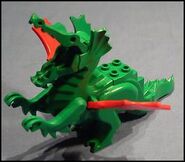 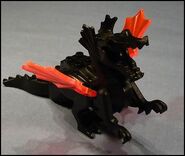 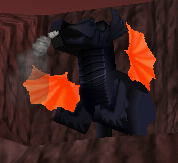 The black dragon in LEGO Racers

A green dragon seen in one of Legoland's cutscenes

A green dragon in Creator Knights Kingdom with green wings. Green was never released as a color for the wings 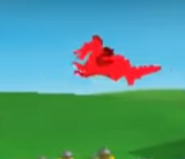 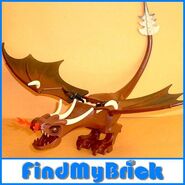 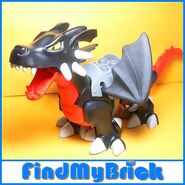 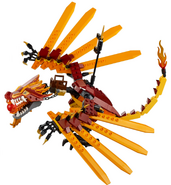 The Ninjago dragon from the Fire Temple.

The Lava Dragon from LEGO Games 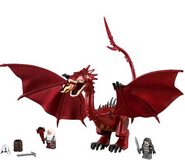 Smaug from The Hobbit

The final design of the Lego Ender Dragon

Lula, a baby dragon
Add a photo to this gallery