"The cake is a lie!"
―Doug's most famous mural message in Portal 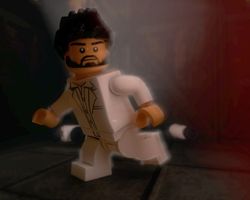 Doug Rattmann is a Portal 2 minifigure released in LEGO Dimensions in 2015.

Doug Rattmann, commonly nicknamed as the Rat Man, was a scientist at the Aperture Science Enrichment Center. Prior to the events of Portal while GLaDOS began flooding the entire facility with neurotoxin, Rattmann is the only known employee to have survived. A paranoid schizophrenic, he is dependent on anti-psychotic medication as a means of keeping him sane. Rattmann appears in-game in certain areas, he also leaves behind paintings and murals which can be found throughout the backstage of various testing chambers in Portal and the single-player campaign of Portal 2.

Retrieved from "https://lego.fandom.com/wiki/Doug_Rattmann?oldid=1961536"
Community content is available under CC-BY-SA unless otherwise noted.