Dilophosaurus (dye-LO-fuh-SAWR-us) is a Jurassic World dinosaur that was first released in 2015 and released with a different color scheme in 2018. A third variant was release in 2019 which was smaller than the previous ones.

Dilophosaurus is a genus of theropod dinosaur that lived in what is now North America during the Early Jurassic, about 193 million years ago. Three skeletons were discovered in northern Arizona in 1940, and the two best preserved were collected in 1942. The most complete specimen became the holotype of a new species in the genus Megalosaurus, named M. wetherilli by Samuel P. Welles in 1954. Welles found a larger skeleton belonging to the same species in 1964. Realizing it bore crests on its skull, he assigned the species to the new genus Dilophosaurus in 1970, as Dilophosaurus wetherilli. The genus name means "double-crested lizard", and the species name honors John Wetherill, a Navajo councilor. Further specimens have since been found, including an infant. Footprints have also been attributed to the animal, including resting traces. Another species, Dilophosaurus sinensis from China, was named in 1993, but was later found to belong to the genus Sinosaurus.

At about 7 meters (23 ft) in length, with a weight of about 400 kilograms (880 lb), Dilophosaurus was one of the earliest large predatory dinosaurs, though it was smaller than some later theropods. It was slender and lightly built, and the skull was proportionally large, but delicate. The snout was narrow, and the upper jaw had a gap or kink below the nostril. It had a pair of longitudinal, plate-shaped crests on its skull, similar to a cassowary with two crests. The mandible was slender and delicate at the front, but deep at the back. The teeth were long, curved, thin, and compressed sideways. Those in the lower jaw were much smaller than those of the upper jaw. Most of the teeth had serrations at their front and back edges. The neck was long, and its vertebrae were hollow, and very light. The arms were powerful, with a long and slender upper arm bone. The hands had four fingers: the first was short but strong and bore a large claw, the two following fingers were longer and slenderer with smaller claws, and the fourth was vestigial. The thigh bone was massive, the feet were stout, and the toes bore large claws.

Dilophosaurus is a member of the family Dilophosauridae along with Dracovenator, a group placed between the Coelophysidae and later theropods. Dilophosaurus would have been active and bipedal, and may have hunted large animals; it could also have fed on smaller animals and fish. The function of the crests is unknown; they were too weak for battle, but may have been used in visual display, such as species recognition and sexual selection. It may have grown rapidly, attaining a growth rate of 30 to 35 kilograms (66 to 77 lb) per year early in life. The holotype specimen had multiple paleopathologies, including healed injuries and signs of a developmental anomaly. Dilophosaurus is known from the Kayenta Formation, and lived alongside dinosaurs such as Megapnosaurus and Sarahsaurus.

When Dennis Nedry turned off the park's security systems so he could steal InGen's dinosaur embryos, Dilophosaurus was one of the many dinosaurs that were free to roam the island. A juvenile Dilophosaur stalked Nedry himself when he was trying to get his vehicle unstuck out of a fallen tree limb. Feeling uneasy, Nedry stopped rope towing his jeep to face his stalker that was right behind him. Dennis Nedry tried to trick the dangerous dinosaur into fetching a stick for him, but the Dilophosaurus showed little care for the stick outside of the brief sound it made when it hit the forest floor. Angered that his trick was unsuccessful, Dennis Nedry jeered the Dilophosaur before running back to his jeep. However, when he turned back around, the "Dilo" was there, and it popped up its frill before spraying venom at Nedry. It missed, and Nedry ran to his vehicle. But before he could get in, another shot by the Dilophosaur hit him straight in the eyes. Poor Dennis managed to get in his vehicle, but he lost the counterfeit shaving cream can that held the dinosaur embryos he stole. When he shut the door, he realized with horror the "Dilo" was inside, and it proceeded to devour him. 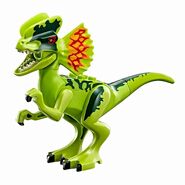 Add a photo to this gallery
view · talk · edit Animals
Retrieved from "https://lego.fandom.com/wiki/Dilophosaurus?oldid=1952697"
Community content is available under CC-BY-SA unless otherwise noted.