Dareth is a Ninjago minifigure and the boastful owner of "Grand Sensei Dareth's Mojo Dojo". He claims to know animal martial arts and to be the brown ninja. In episode 26, Kai dubbed him an "official" member of the Ninja team. He is often portrayed as a clumsy and goofy character, helping people due to luck. He first appeared in the Ninjago: Masters of Spinjitzu TV show, and later released as a minifigure in 5002144 Dareth vs. Nindroid and 70751 Temple of Airjitzu.

Dareth has smooth, glossy hair and a proud smile. He wears a light brown gi, that being the name for martial arts apparel. The left side of the gi is folded over the right, with the edges of the clothing lined with gold. He wears golden necklace with a star in the middle. His legs feature symmetrical dark brown and elaborate gold printing.

The Ninjago City Docks version of Dareth reuses the black Wu-Cru Gi released with various Ninja and the head and hair pieces from Dareth's previous minifigure appearances. It also comes with a small Microfigure trophy.

Dareth, or "Grand Sensei Dareth", bragged that he was the master of all "animal" fighting styles (the tiger, penguin, python, and dragon) He also claimed that he could call on the Ultra Dragon whenever he needed help. He was at one point asked by the ninja if they could use his dojo to train Lloyd Garmadon, the destined Green Ninja. Dareth agreed to let them if they were able to defeat him in a battle. Kai had Dareth flat on the ground within two maybe four seconds and they were then allowed to use his dojo. Sometime later, Dareth and the ninja witnessed Lloyd break twenty wooden planks along with the floor under them using an Earth Spinjitzu power. Dareth then claimed he could break fifty boards, having his students, Jeff and Phill, set them up, in an attempt to persuade the ninja into letting him join the group as "The Brown Ninja". However, Dareth broke a total of zero boards and was laughed at by all the ninja as he clutched his arm. When Captain Soto and his pirate crew invaded Ninjago with The Black Bounty. Dareth attempted to attack the pirates as "The Brown Ninja," only to be tied up in ropes and forced to "walk the plank". When Dareth fell, he was rescued by Lloyd, who was riding the Ultra Dragon. He later asked the ninjas to forgive him for his boastful ways, admitting that he had had no training, that he had simply painted his belt and that his trophies were all fakes.

In Ninjaball Run, his dojo was going to be demolished by a company called Darnagom Enterprises, which was used by Lord Garmadon attempting to stop the training of Lloyd, who would eventually have to fight him if he were allowed to reach his true potential. To save the dojo, the ninja participated in the Ninjaball Run, a race that offered enough prize money to save the dojo. Dareth was able to make an emotional speech during the race to have the crowd cheer for the ninja.

In The Last Voyage, the ninja put him in charge of the people of Ninjago and declared him as the brown ninja. When asked about his element, Nya replied: "Hot air?", leaving him thinking that he had the power of controlling the wind.

In The Ultimate Spinjitzu Master, Dareth was the only person left in Ninjago city who had not been turned evil by the Overlord and his Stone Army. When the Overlord morphed into his true form of a giant dragon, the Helmet of Shadows, that which controlled the Stone Army, fell off his head. Dareth found it and became the leader of the stone army. He commanded his new soldiers to help him attack the Overlord. After the Overlord's defeat, the ninja finally decided to make Dareth an official member of their team.

The Tournament of Elements

He returns in season four, with Nya reluctantly taking him along on her journey to Master Chen's island, where he provides some assistance to her due to his abilities as a "Master of Disguise expert." Unfortunately, he manages to get himself caught by Chen's forces, but is later freed and joins the Ninja in their efforts against the reborn Anacondrai tribe.

Dareth returns in season five in a few brief appearances. He appears as a blow-up doll when Nya turns on the autopilot on the Bounty. The doll is later popped during the fight with Morro. He makes a brief appearance a few episodes later. He is seen driving and flirting with a woman driving by. He later hits a cement mixer and get covered in cement due to Jay knocking an ink well onto his scroll in the Cloud Kingdom.

In season six Dareth becomes the Ninja's manager, but displays some chauvinistic attitudes with regards to the Ninja "boy band" adding a girl to the group, and puts Nya in segments teaching girls about cooking and makeup.

In Day of the Departed he is now managing the Royal Blacksmiths for their Day of the Departed concert, only to be targeted by the revived General Kozu in search of revenge. However, he is able to defeat Kozu by finding the Helmet of Shadows and using it to take care of Kozu's Stone Warrior henchmen, who then defeat Kozu for him.

In The Hands of Time he "supervises" while Ronin helps Misako move various items into the Temple of Airjitzu, and ends up on the floor with Ronin standing on him after messing with Nya's Samurai X helmet just prior to a temporal disruption. He reappears in Scavengers where his trophies are stolen by the Vermillion, whom he encounters after going to Ronin's new shop to buy new ones. The two later alert the ninja of the activities of the snake warriors, and join them in a battle where Dareth goes into a rage after Ronin reminds him of the theft, only for Ronin to end up with a broken leg. In Secrets Discovered the new Samurai X briefly poses as Dareth to confuse Nya, but this deception fails when the samurai demonstrates a level of fighting ability far beyond Dareth. Ninjago.com subsequently depicted Dareth as the new curator of the Ninjago Museum of History following the revelation that Dr. Saunders was in fact Krux of the Time Twins.

In Season 8, Dareth has become the owner of a bar called Smiley's, which has been taken over by the Sons of Garmadon as their hangout.

In Season 9, Dareth joins the resistance effort against Lord Garmadon, and with help from Mystake finally gains "brown power."

Dareth visits the Monastery of Spinjitzu and walks in as Jay is getting Kai's advice on proposing to Nya. Both he and Kai prove less than helpful, and Jay quickly changes the subject when Nya walks in. Later, Dareth attends the ceremony commemorating the victory over the Oni. 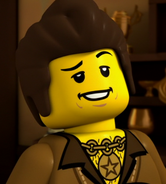 Dareth with the brown ninja mask on.

Dareth wearing the Helmet of Shadows. 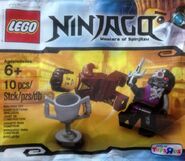 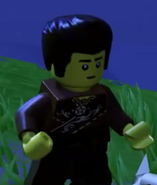 Add a photo to this gallery
view · talk · edit Ninjago minifigures
Retrieved from "https://lego.fandom.com/wiki/Dareth?oldid=1949413"
Community content is available under CC-BY-SA unless otherwise noted.