Daleks are antagonists from the Doctor Who franchise.

First encountered by the First Doctor on their home planet Skaro in the 1963 serial The Daleks, the Daleks looked entirely robotic but they were in fact cyborgs, with a living Kaled mutated due to radiations encased in and supported by an armed and mobile outer shell of Dalekanium and polycarbide protective metal armour. These were Mark III travel machines designed to carry their mutant forms, so they were not true integrated biomechanoids. In this respect, they were somewhat similar to a Cyberman; unlike them, however, the Daleks' bodies had mutated so drastically from their Kaled ancestors they had lost all humanoid appearance, save for one eye. The Daleks transmitted information using a sort of artificial telepathic network known as the Pathweb.

Daleks are an antagonist, aggressive species, and utterly xenophobic. They are noted to shout their prime goal for all non-Dalek life: "Exterminate!". Their creator Davros was first encountered by the The Fourth Doctor.

The Daleks also have a Dalek Emperor, an enormous Dalek with transparent casing that was first encountered by The Second Doctor back in 1967 and again by The Ninth Doctor in 2005.

The Daleks are also among the antagonists assembled by Lord Vortech, assisting him in his efforts to take over the various worlds. They notably appear in the Metropolis level where one of their saucer ships serves as the setting of the boss battle against Sauron, with several Daleks attacking the players during their efforts to defeat the Dark Lord.

Daleks are among the villains being held in the Phantom Zone. They are released into Gotham City by the Joker. The are not referred to by name in the film, and are instead called "evil British robots". The Daleks featured in the film have got the colours of 2010 New Paradigm Daleks, but their casing seems to have the shape of the 1963 Skaro version and their voice is the typical Dalek voice, not the deeper New Paradigm voice.

A Dalek seen in LEGO Dimensions 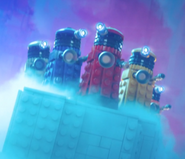 In The LEGO Batman Movie

Retrieved from "https://lego.fandom.com/wiki/Dalek?oldid=1961557"
Community content is available under CC-BY-SA unless otherwise noted.