A DUPLO Figure is a figure used only in the DUPLO theme to represent people in the sets. The first Lego Minifigures were simillar to the Lego Duplo figures. These specific type of figures are much larger than typical minifigures found in most LEGO themes.

The first DUPLO figures had no legs or arms like System minifigures had randomly assorted coloured bodies, including Bright Blue, Dark Green, and Black, White heads, like the minifigures from the time. They had assorted coloured hair and hats including Brown, Black, Bright Red, Bright Yellow, Bright Blue, Dark Green, and Medium Grey.

Later, DUPLO figures were updated with a more detailed design with posable arms and legs as well as more realistic skin tones, though they retained similar expressions.

More recently a third redesign has progressed the DUPLO figure into a less square shape that is once again more detailed with a nose and ears moulded onto the head as well as less square body parts.

Children DUPLO figures are much the same as regular ones, despite having shortened arms, legs and torsos.

One of the first DUPLO figures

One of the first DUPLO figures

An example of the second DUPLO figure type

The most recent DUPLO figure design 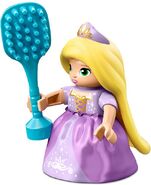 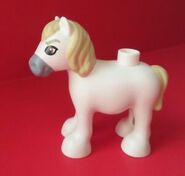 Add a photo to this gallery
view · talk · edit LEGO Figures
Retrieved from "https://lego.fandom.com/wiki/DUPLO_Figure?oldid=1942681"
Community content is available under CC-BY-SA unless otherwise noted.