"Cyrus Borg? Yes. Unfortunately when my parents gave me a name like that, my future in technology was predetermined."
―Cyrus Borg"

Cyrus Borg, or OverBorg, is a Ninjago figure in the Rebooted line. He was physically released on December 1, 2014 in the set 70722 OverBorg Attack.

Cyrus Borg's minifigure shows him when he was the OverBorg. He has a black hairpiece along with a cybernetic eye. He also has a black shirt with robotic parts and plain grey legs.

The Age of Technology

"Welcome to New Ninjago City! The future is what we make it!"
―Cyrus Borg

After the defeat of the Overlord, Cyrus Borg encouraged the citizens of Ninjago rebuild Ninjago City. He made the city a center of technological advancements and named it, "New Ninjago City". He made many inventions such as the hover-car, security mech, super hybrid assault vehicle, fighter jet, and hover-copter. He built Borg Industries on the site of the Overlord's defeat. He was also working on The Digiverse, a game where the player will be digitally scanned inside.

Rise of the Digital Overlord

"Protect them with your life! All of Ninjago depends on it! You're right! I should never have built it here! You must go; he's listening!"
―Cyrus Borg

In The Surge, the Overlord returned which is disguise himself as computer virus. He told Borg to make the Ninja return to New Ninjago City. When the Ninja arrived, Cyrus Borg came with a spider-like mech chair, and told the Ninja he had been disabled all of his life. He also told Zane that he felt sorry his father died. Then, Cyrus gave the Ninja a statue of himself. Inside, he put in the Techno Robes and Blades. He told Kai that the Ninja must go, and that the Overlord is listening. Soon, the Overlord discovered that Cyrus Borg gave the Ninja the Techno Blades, which were the only thing that could defeat him. He added robotic parts to Cyrus and possessed his mech chair.

In Blackout, builders at Borg Industries find Cyrus Borg on the ground. When Cyrus Borg wakes up, he sees that the Overlord's hard drive is gone. Since the Overlord possessed Borg's mech chair, Cyrus traveled on an ordinary wheel chair.

In The Curse of the Golden Master, Cyrus Borg meets the Ninja, telling them that a "Stranger" has stolen the Digital Overlord's hard drive, as well as some prototypes. He uses some of P.I.X.A.L.'s energy the power his computers.

In Enter the Digiverse, Cyrus Borg tells the Ninja that the Overlord is in the Digiverse. He sends the Ninja inside with their Techno-Blades. The Ninja succeed. However, the Nindroids capture Borg.

"Borg is still here! What use is he now that Project: Arcturus is completed?"
―Overlord to Pythor

In Codename: Arcturus, Pythor turns Cyrus evil again, becoming the OverBorg. As OverBorg, he builds Arcturus, a rocket that will bring the Nindroids to the Golden Weapons of Spinjitzu. However, the Ninjago noticed and came to their base in Ouroborus. He stopped Lloyd from preventing Pythor of launching the Arcturus. He throws him down the platform, but Lloyd survives because the Ninja catch him.

In The Void, the OverBorg arrives to Borg Industries, along with Pythor and the Overlord. They place the Overlord in a capsule restoring his body as a 90% Golden Master.

Rise of the Titanium Ninja

"I used to think technology would be the answer to all of our problems. But then, I saw technology invent new problems; devastating problems. And then, a Nindroid named Zane saved us all. He was the perfect balance between us and technology. He taught us that live should be a balance. Technology can improve our lives, but so can people. And if we focus on one expense over the other, that's when the balance is off. Our city will find its way again; but this time with Zane as our compass. With that, I give to you, the Titanium Ninja!"
―Cyrus Borg's speech in Zane's funeral

In The Titanium Ninja, General Cryptor frees Borg. He gets on his wheel chair and tells the Ninja he has a weapon that can weaken the Golden Master. A shrinking pill. Wu and Garmadon try to put it into the Overlord's mouth, but Pythor swallows it, instead. Soon, Zane sacrifices himself to the Overlord, teaching Cyrus that humanity is more important than technology. He builds a statue in honor of him and dubs him "The Titanium Ninja."

Staunch Ally of the Ninja

Borg worked together with Wu in The Invitation to continue Lloyd's training with a simulation in which the young Ninja attempted to claim the Golden Armor. He would later return in Curseworld, Part I, having been paid the proceeds from the sale of Wu's tea farm in order to construct equipment for the ninja, though he was unable to provide Lloyd or Kai with a vehicle. In Infamous an information kiosk with Borg's likeness as its interface brought Nadakhan up to speed on the fate of his crew, while in Public Enemy Number One the Djinn infiltrated Borg's facility in Hiroshi's Labyrinth in order to obtain the Realm Crystal and briefly impersonated Borg's hologram in the process. He also played a minor role in The Dark Island Trilogy, in which he was revealed to have repaired the Golden Mech of The First Spinjitzu Master at Wu's request.

Borg would later reappear in The Hatching, in which he is present for the unveiling of his new Borg Watch only to be abducted by Acronix and Krux after the unveiling is attacked by their Vermillion warriors. Taken captive, Borg would be forced to create an engine that would use the power of the Time Blades to motorize the Iron Doom, a time-traveling vessel and weapon created for the Hands of Time. Though he was unable to do much to stop them due to being menaced by General Machia, he was able to build a self-destruct mechanism into his engine, which he later attempted to enter with help from Zane and the new Samurai X after they rescued him. Unfortunately, this effort was thwarted, though the ninja were successful in stopping the Time Twins from altering history. 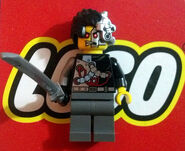 Cyrus Borg possessed by the Overlord

Cyrus Borg before he was the OverBorg 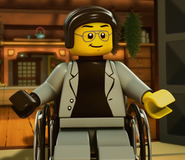