This article is about the DC Universe Super Heroes character. For the Collectible Minifigures, see Space Villain and Cyborg.

Cyborg is black, with the right half of his face being left untouched by the machinery. He has short, black hair. The left side of his face is covered by a silver helmet with extends around his chin and on his cheeks on the right half of his face. The mask has a red, glowing eye and a small, red circle on the forehead. Cyborg's face has two expressions, one confident and one angry. He has a silver torso with part of his chest exposed and a red circle in the center of his chest, which is covered by silver plating and machinery. His arms are also printed, with part of his skin exposed, and his legs and hips are also silver and covered up with machinery. Cyborg's torso is black with the details of his armor, and his arms are pearl silver. The suits' armored details continue down Cyborg's legs, which are also pearl silver. In LEGO Batman 2: DC Super Heroes, Cyborg is magnetic, able to activate machinery, and shoot lasers from his artificial eye. He is unlocked for free-play after the level "Tower Defiance" is completed and is also playable in the story-mode of "Heroes Unite".

Half of Victor Stone's body was destroyed in a tragic accident. He was saved through experimental technology created by his father Silas Stone, and his body parts were replaced with high-tech gadgets and weaponry. To have Vic around people who may understand his condition, Silas asked the Justice League to accept Vic among them as Cyborg.

He is a member of the Justice League, which mainly consists of Superman, Batman, The Flash, Green Lantern, Wonder Woman, Martian Manhunter, Aquaman, and on some occasions Nightwing, Batgirl, Supergirl, and Huntress.

In LEGO Batman 2: DC Super Heroes, Cyborg is a member of the Justice League. He is one of the members being monitored by Martian Manhunter when he checks in on Bruce Wayne.

Later, when Lex Luthor and the Joker attacked Wayne Tower with their Kryptonite powered mech, Cyborg, Batman, Robin, and Green Lantern entered through the bottom of the destroyed tower while Superman and Wonder Woman held it in place. When Green Lantern used a train construct to knock the robot off of the building, Cyborg and the others dove off the edge after it and fought with The Joker. When the robot was defeated, Green Lantern created an elevator and lowered the heroes unable to fly to safety. The Flash and Green Lantern repaired the tower, relieving Superman and Wonder Woman. Cyborg then joined Batman, Robin, Wonder Woman, Green Lantern, The Flash, and Martian Manhunter (from the Watchtower) in destroying what was left of the robot, fought with and defeated Joker again, and then tried to avoid Luthor's weaponry from his back-up mech until Robin and Manhunter could target the Watchtower's cannon long enough to destroy it.

Cyborg teams up with other DC superheroes to save the world from Brainiac. Cyborg, just like Batman, Robin, Lex Luthor, and the Joker has a wide selection of new suits to help out with stopping Brainiac. When he is affected by the Emotional Spectrum, Cyborg fears everything.

Cyborg with the Justice League 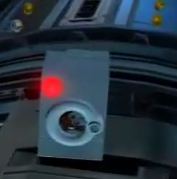 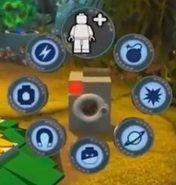 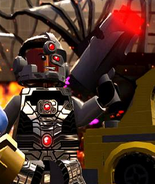 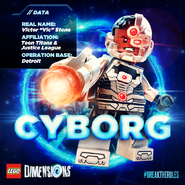 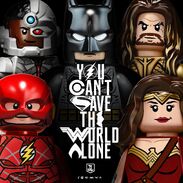 Cyborg in The LEGO Movie 2: The Second Part alongside the other members of The Justice League. 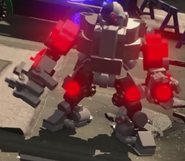 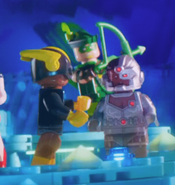 In The LEGO Batman Movie.