"I'll let you leave... When I get my arm back!"
―Curt Connors in LEGO Marvel Super Heroes 2 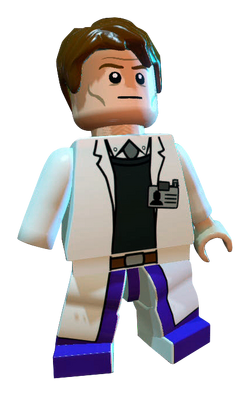 Doctor Curt Connors is a scientist who experimented with lizard DNA to find a way to regenerate missing arm. He tested his formula on himself to regenerate the limb however along with healing his arm, it transformed him into a human/lizard hybrid. Now calling himself the Lizard, Curt went mad and became a super-villain enemy of Spiderman.

Curt Connors mutuates into the Lizard.
Add a photo to this gallery
Retrieved from "https://lego.fandom.com/wiki/Curt_Connors?oldid=1951038"
Community content is available under CC-BY-SA unless otherwise noted.