Crystalien Conflict is an online Mars Mission strategy game that was playable on LEGO.com. In the game, players can command either the alien or astronaut forces to victory. Each faction has 9 missions, a conflict mode and a special ops mode. There are also bonus missions which can be accessed through various cheat codes that were available in LEGO Club Magazine.

Players can build structures, create forces and command them to attack the opponent. Players start off with just the main base: the Eagle Command Base for the humans, and the Alien Mothership for the aliens. Players can then start by respectively building power plants or energy generators. This provides players with energy, which is needed to power other structures. There are also buildings such as training centres for infantry, defence cannons, vehicle factories, radar stations, technology centres and satellites. Constructing one of these buildings will unlock the next unit in the build chain.

The armies become available once players have built the necessary buildings; infantry and engineers come with a training base, vehicles come with the vehicle factory. The Astro-fighters are unlocked with the radar station. The last building available, the satellite, provides the player with a bombardment ability, costing 3000 credits, which players receive through mining Crystals.

All parts of the armies are different. They have various amounts of health, and some have special abilities. The Recon Dropship and the 'Hyper Carrier' have space for several infantry to board and they can release them where ever needed (except on acid pools). With a maximum of two Recon Dropships or Hyper Carriers on the field at once, it is enough to carry all of a player's soldiers and engineers. Engineers, or saboteurs, as they are called in alien form, can fix various vehicles and buildings or hijack opponent structures. A player can then create opponent pieces if they have captured one of their enemies buildings.

In some missions, players do not have a mothership or a home base, which means that they cannot create new structures. In these missions, players are restricted to constructing a set amount of pieces. Also, on the battlefield, players can find alien capsules or human crates. Collecting these can give them a reward, such as extra money or a free piece. In certain levels, this is the only way players can build their army up.

The Alien Hive is the base of the aliens. The Alien Commander protects it from the Astronauts. In the game, the Hive is the equivalent of the Hypersonic Operations Aircraft. It can fire, but there are no weapons attached to it.

Like many other strategy games, this game has cheats. Underneath are codes, with their use listed next to them:

Note: When users do this by starting on the human side and the users skip past the last level, the users play the alien levels as the humans. The "beeblebrox" code does not disable Conflict Mode Highscores.

None of the codes are case sensitive (except for moneypenny).

More levels can be unlocked in Conflict Mode.

The Eagle Command Base with defenders

An Alien Drone as he appears in one of the cutscenes

Santa and his sleigh and reindeer

The soccer field of level "Match" 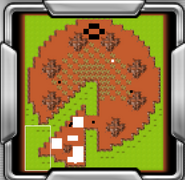 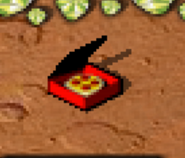 The Alien Mothership
Add a photo to this gallery
Retrieved from "https://lego.fandom.com/wiki/Crystalien_Conflict?oldid=1905944"
Community content is available under CC-BY-SA unless otherwise noted.