"To me, my knights! Safeguard the kingdom and drive these villains from our gates!"
―The Crown King

The Crown King is a Minifigure from the Castle (2007) Theme. He is the ruler of the Crown Knights, as well as the other humans in the realm. In 2009 a version was released with a new printed body, legs, red beard, and a blue plume on the crown. The 2009 version does not include a cape. He has at least one daughter, who appears in the theme as well as a prisoner of the Evil Wizard.

After a win in LEGO Battles.

After a loss in LEGO Battles. 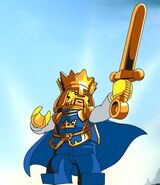 Retrieved from "https://lego.fandom.com/wiki/Crown_King?oldid=1846926"
Community content is available under CC-BY-SA unless otherwise noted.