"Excuse me, but do you happen to have any gold?"
―Conquistador

The Conquistador is a Minifigures minifigure from Series 8 released in 2012.

The Conquistador is one of the few minifigures to have Historical backgrounds, and most notably invading the Aztec's, and taking their gold, which did not mean much to the Aztecs, due to the high amounts of the substance. Conquistadors were generally from Spain and Portugal, and were often sent around South America in search for treasures. 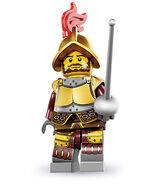 A CGI image of the Conquistador
Add a photo to this gallery
Retrieved from "https://lego.fandom.com/wiki/Conquistador_(Minifigures)?oldid=1888986"
Community content is available under CC-BY-SA unless otherwise noted.