"Your efforts have been outstanding! You've collected enough Energy Crystals to get the Rock Raiders team back home. You're amazing! Mission complete."
―Chief, after the final mission, Rocky Horror.

Chief is a character from the Rock Raiders theme. He is exclusive to one set.

The Chief only appears in one set in the Rock Raiders series. He has old grey legs and torso with a printed shirt which has a Power Box with power lines connected to one of his arms, which is turquoise in color, but the right arm being only grey with a yellow hand. His face is masculine with a grey mustache and eyebrows. Additionally added is a pilot helmet accessory with a neon-green visor.

In the video game, there are several differences in Chief's appearance. The helmet with the green visor is chrome in color, and the shirt printings have been slightly altered, including the Power Box. In addition, the pants have a belt printed on the waist, and silver and orange pants markings with black and yellow caution lines appear on the front of the legs.

The Chief commands the exploration ship, the L.M.S. Explorer. His left robotic arm, teal green in color, houses a deadly plasma cannon and he's a well-experienced miner as well as the team leader. The book High Adventure Deep Underground says he lost his real arm in an accident rescuing 37 trapped miners from a cave-in on Pluto. He appears in the Rock Raiders games, where he gives mission briefings. 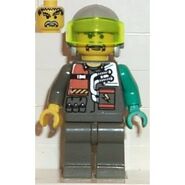 Chief as he appears in the video game.

Add a photo to this gallery
Retrieved from "https://lego.fandom.com/wiki/Chief_(Rock_Raiders)?oldid=1873414"
Community content is available under CC-BY-SA unless otherwise noted.