Cheetah, is a DC Comics minifigure released in 2020.

Priscilla Rich was the first woman to become the Cheetah. Rich had an inferiority complex, as well as suffering from split personality and self-importance. Upon seeing an image of a woman dressed like a Cheetah in her mirror, Rich decided to don a similar outfit to commit her crimes. She attempted to frame Wonder Woman for a robbery by hiding money in her apartment and then setting the place on fire, but Wonder Woman survived. After several more run-ins with Wonder Woman, Rich eventually retired to Maryland. 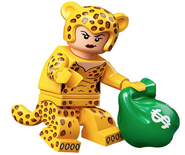 Retrieved from "https://lego.fandom.com/wiki/Cheetah_(Priscilla_Rich)?oldid=1963388"
Community content is available under CC-BY-SA unless otherwise noted.