Captain Marvel, a.k.a. Carol Danvers is a Marvel Super Heroes minifigure that first appeared in LEGO Marvel's Avengers. She made her first physical appearance in 2016.

US Air Force Special Operations Colonel Carol Danvers was the youngest security captain in NASA's history when she befriended Dr. Walter Lawson, really the undercover Kree warrior Mar-Vell (known to Earth as Captain Marvel) and became entangled in the schemes of the Kree Empire. During a fight between Captain Marvel and his enemy Yon-Rogg, Carol was exposed to a form of radiation generated by the Kree Psyche-Magnitron, a device that could turn imagination into reality. When the device exploded, Carol's wish to be powerful enough to protect herself and an injured Mar-Vell came true as it altered her genetic structure and effectively made her a half-Kree superhuman. She gained the powers of flight, super-durability and super-strength along with energy projection and heat absorbtion. Originally super-heroing under the name Ms. Marvel (a nod to her friend Mar-Vell), Carol took over the mantle Captain Marvel after Mar-Vell's death at Captain America's urging. She has also become a mentor to young heroine Kamala Khan, who took on Carol's old mantle of Ms. Marvel.

Captain Carol Danvers, also known as Captain Marvel, is a former United States Air Force pilot who, upon being exposed to the energy of the Tesseract via the destruction of the Light Speed Engine, obtained cosmic powers. She was made into a Kree-human hybrid via the blood transfusion from Yon-Rogg, while having all of her memories removed, turning her into the Kree's weapon and a member of Starforce. During the Kree-Skrull War, Danvers returned to Earth and began recalling her past, with help from Nick Fury as well as Maria Rambeau. As Danvers also discovered that Yon-Rogg and the Kree Empirehad been manipulating her for years, learning from Talos that the Skrulls were merely seeking to find a new home. With this information, Danvers unlocked her true powers and defeated the Kree invasion onto Earth that was being led by Ronan the Accuser, before setting off out to the far reaches of the galaxy to finish what her late mentor Mar-Vell had once started.

Spending twenty-three years journeying through the universe, Captain Marvel learned of the Decimation through a distress call sent out by Fury and joined the Avengers in an attempt to confront Thanos and reverse the damage done, managing to also rescue Tony Stark and Nebula from deep space along the way. However, despite their first attempt at finding the Infinity Stones failing, Captain Marvel returned to Earth in 2023 when the Avengers had just succeeded with their second attempt to reverse the Decimation and assisted them in the fight against Thanos and his army of Chitauri and Outriders. Eventually, the combined efforts of Captain Marvel and all the heroes of Earth triumphed over Thanos' forces, although Iron Man sacrificed his life, Danvers attended his funeral before going off-world 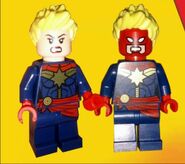 Add a photo to this gallery
Retrieved from "https://lego.fandom.com/wiki/Captain_Marvel_(Carol_Danvers)?oldid=1960934"
Community content is available under CC-BY-SA unless otherwise noted.