Captain Ironhook is the second main Pirates captain in the LEGO Pirates theme. He wears ripped up clothing, and in some sets has a peg leg. He and his pirates were the first to encounter the Islanders. He also appears in the LEGO Pirates audio drama "Piratensegel am Horizont" (English version of transcript available here).

A set description referring to him as Ironhook 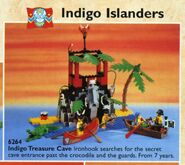 Another set description referring to him as Ironhook

Retrieved from "https://lego.fandom.com/wiki/Captain_Ironhook?oldid=1857755"
Community content is available under CC-BY-SA unless otherwise noted.