"Instead, let’s chalk it up to global freezing!"
―Captain Cold in LEGO DC Comics Super Heroes: The Flash

Captain Cold wears the same hood previously used by the Ice Fisherman, but the brown parts are replaced by cool blue and a sharp is added at the end. He wears blue glasses and has a light blue muscular torso with a yellow belt. His hips and legs are light blue, decorated with boots and ice on it.

In LEGO Batman 2: DC Super Heroes he has an Ice gun and is immune to cold environments.

In the comics, after Leonard Snart's grandfather died, he left home and worked with a small gang of thieves. After he was captured by the Flash during a robbery, he swore revenge in prison and figured a way to defeat the Flash. He created a cold gun that can lower temperatures to absolute zero and slow everything down. Upon this, he titled himself "Captain Cold" and eventually become the leader of the Rogues against the The Flash, becoming his arch-enemy.

Captain Cold plays no role in the story but is available on the console version through downloadable content.

In the portable version Captain Cold is an unlockable character. He is unlocked for purchase after finding the third minikit of the fifth level, Ace Chemicals. He costs 80,000 studs. 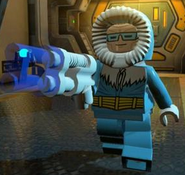 In LEGO DC Super-Villains
Add a photo to this gallery

Retrieved from "https://lego.fandom.com/wiki/Captain_Cold?oldid=1931438"
Community content is available under CC-BY-SA unless otherwise noted.