Blackout is the third episode of the third season of Ninjago: Masters of Spinjitzu which was aired on April 16, 2014 along with The Curse of the Golden Master.

In the beginning of the episode, Zane gives half of his power source to P.I.X.A.L., which caused him a lot of pain but made him a lot closer to her. Jay finds out that Nya also likes Cole; Cole and Jay get in a huge fight about who should get Nya. The Stranger steals the hardrive containing Overlord, and uses Electro Cobrai to power Nindroids, and Wu, who now became Techno Wu, possessed by Overlord. Meanwhile, Zane can no longer do Spinjitzu since he gave half of his energy source to P.I.X.A.L., so he became an easier target. But after the fight, the Nindroids, Overlord,and the stranger (who turns out to be Pythor) has finally located Lloyd and Sensei Garmadon, making them really easy targets. The falcon, unknown to them, is the Overlord's new method to track them into the labyrinth. 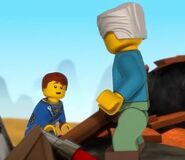 Add a photo to this gallery
Retrieved from "https://lego.fandom.com/wiki/Blackout?oldid=1878363"
Community content is available under CC-BY-SA unless otherwise noted.