Bib Fortuna is a Star Wars minifigure introduced in 2003. He was a Twi'lek male who was Jabba the Hutt's right-hand man, or major-domo.

Bib Fortuna's Minifigure is made up of Earth Blue legs and hips, a dark blue torso with a silver chest plate, a black cape, dark blue arms with Tan hands, a wrinkled tan head, and a tan Twi'lek headpiece. He has one accessory- a dark blue cape.

In 2012 a redesign of Bib Fortuna was released with the set 9516 Jabba's Palace. He has a printed orange eyes and sharp teeth.

At an early age, Bib was cast out of the Twi'lek society. He started smuggling spices, and was then found by Jabba the Hutt, who asked Fortuna to work for him. Bib accepted, and worked his way up Jabba's business, right to the top.

Given that he worked for Jabba for such a long time, it is surprising that he hated Jabba greatly. He tried many a time to get the Hutt killed.

After Jabba was killed, Bib fought a small battle over Jabba's possessions, and won. However, soon after that, the B'omarr Monks removed his brain from his body, and placed it on a BT-16 Perimeter Droid. Later, Bib lured another Twi'lek to Tatooine and arranged for the B'omarr Monks to place his brain into the Twi'lek's body. With a new body, Fortuna began to rebuild Jabba's criminal empire. 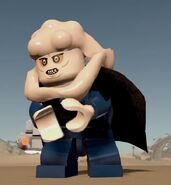 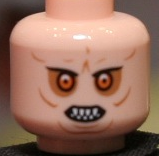 Face Printing
Add a photo to this gallery