The Berserker Uruk-hai is a minifigure from the theme The Lord of the Rings released in May 2012.

The Berserker Uruk-hai is mainly reddish-brown, which is its skin colour. It appears to be wearing nothing but a loincloth and helmet, as shown by the helmet and grey hips. The torso has printing of a heavily muscled chest and stomach, with two white hands on the chest: the Hand of Saruman. The head has a silver helmet printed on it with a white splash on where the face would be. Two black dots in the front represent eye sockets and a dome-shaped opening for a mouth hole is located below them. The mouth has pointed, yellowed teeth opened and bared in a roar.

Berserker Uruk-hai were Orc-men bred with Orcs by Saruman. They bore the white hand of Saruman. When 10,000 Uruk-hai attacked the Rohirrim and the Fellowship at Helm's Deep, a Berserker Uruk-hai rushed forward with a torch to light the explosives placed at the Deeping Wall. It succeeded, despite being pierced several times with Legolas's arrows. They were much tougher than any other Orc, on some occasions even superior to men and elves. Uruk-hai have the same life spans as elves, meaning they can live forever unless killed. The Berserker was a special breed of Uruk-Hai. They were harder to kill and were what their name indicates them to be, berserkers. They filled their helmets with blood which drove them into a blood frenzy and they went berserk. Not expected to live, their main purpose was to strike terror in enemy lines. 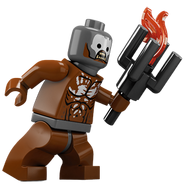 The back of the Berserker

The Berserker with its torch 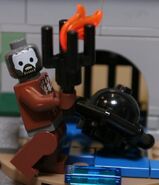 About to blow up the bombs at Helm's Deep 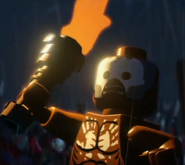 As seen in LEGO The Lord of the Rings: The Video Game