The Basilisk is said to be at least 60 feet long, and as with most snakes, it will shed its skin eventually. It is also the "dreaded monster" of the Chamber of Secrets at Hogwarts. Harry Potter killed it, preventing further attacks on the students of Hogwarts. He then used one of its fangs to destroy Tom Riddle's diary. This made Tom Riddle evaporate, saving Ginny Weasley. However, that same fang had been stuck in Harry's arm, almost killing him as well, if it had not been for Fawkes. In the Deathly Hallows, Ron and Hermione go into the tomb of the dead basilisk and gather its fangs to destroy the Horcruxes. 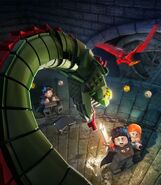 The Basilisk in promotional art for the video game 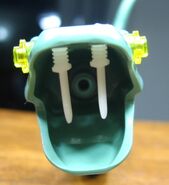 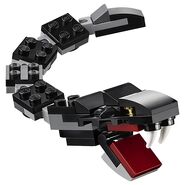