Barriss Offee is a minifigure originally introduced in 2010, based upon the character of the same name in the Star Wars universe. To date, three different versions of Barriss have been made.

The first Barriss minifigure is based upon her film appearances, and features a completely black leg piece, with a black torso. The torso has printing on the front only- dark blue printing to depict the attire Barriss commonly wore, with a printed belt (brown with a shiny gold buckle) at the bottom of the piece. The torso also had black arms, with tan hands, reflecting the skin tone that Barriss has in the Star Wars universe.

For the same reason, Barriss' head piece is also primarily tan, with printing in various colours to represent the face- black printing for the eyebrows, eyelashes, eyes and detailing for the mouth, white for the pupils, and a dark blue for the mouth and tattoos in the centre of Barriss' face. There is also some additional printing around the top of the eyes for extra detail. Barriss has three accessories- a black hood piece accompanied by a matching cape, and a blue-bladed lightsaber with a silver hilt.

In 2012, a new variant of Barriss Offee was made, this time for The Clone Wars subtheme. This variant once again has a plain black leg piece, and a black torso with tan hands. Grey printing is used on the front of the torso for detailing of the clothing as well as outlining, and the belt is brown with a utility pouch and clasp printed on it. The back of the torso does not feature any printing, but is covered by a blue cape which is smaller than most minifigure capes- it can be worn by minifigures with shortened legs- and reflects the shortened cape that Barriss wore during the Clone Wars. The head piece is tan, with printing for the eyes, eyebrows and facial tattoos, along with the lips which are purple for this design. A blue hood is worn over the head piece, matching the colour of the cape. Once again, Barriss comes armed with a blue-bladed, silver-hilted ligthsaber.

Barriss made her debut video game appearance in LEGO Star Wars III: The Clone Wars. The character's appearance is based upon her original minifigure. In the game, like most Jedi she has the ability to double-jump, use the Force to build or push certain enemies, perform attacks with her lightsaber including a lightsaber throw, defeat certain enemies and cut through certain walls that only lightsaber wielders can, and jump up certain pairs of walls by burying her lightsaber in one wall and jumping to the other. She was a playable character in the story mission "Weapons Factory" along with Ahsoka Tano.

During the second Battle of Geonosis, Barriss Offee and Ahsoka Tano infiltrated a Separatist weapons factory in order to destroy it while Anakin Skywalker and Luminara Unduli fought aboveground. After that battle, she was infected by a Geonosian brain worm, but recovered through the actions of Ahsoka Tano.

Later in the Clone Wars she was responsible for bombing the hangar area of the Jedi Temple and framing Jackar Bowmani. She was arrested, but for some reason remained in the Jedi Order and became a clone medic on the planet Drongar. 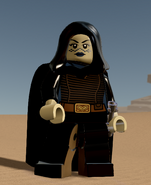 LEGO Star Wars: The Force Awakens appearance
Add a photo to this gallery