Bala-Tik is a minifigure that first appeared in LEGO Star Wars: The Force Awakens. Its physical form was released in 2017's set,75180 Rathtar Escape.

Bala-Tik was an agent of the Guavian Death Gang in the decades after the Galactic Civil War. During this time, Bala-Tik came to know the famed smuggler Han Solo. For a time, Bala-Tik considered Solo to be a source of valuable information and obtained a number of profitable leads from him. During the conflict between the First Order and the Resistance, the Guavian Death Gang paid him and his first mate, the Wookiee Chewbacca, to acquire Rathtars for King Prana. Unknown to the Death Gang at the time was that Solo also acquired the same amount of credits from Kanjiklub with the intention of swindling both factions. When the two groups learned of Solo's scheme, they confronted him aboard his freighter, the Eravana. Bala-Tik, out of patience, arrived first and told Solo that he knew about the smuggler's deceit and that Solo's game was too old—there was no one in the galaxy left for the Corellian to swindle.

After Kanjiklub arrived, Bala-Tik noticed that Solo was in possession of BB-8, an astromech droid that was being pursued by the First Order because it contained part of a map to the location of the self-exiled Jedi Master Luke Skywalker. Rey and Finn, two fugitives who were with BB-8 and who Solo had hidden in his ship, heard Bala-Tik's threats to kill Solo and Chewbacca and take the droid. Hoping to close the doors between Solo and the two gangs, Rey instead accidentally released the rathtars, and the fearsome creatures went on a rampage throughout the ship, killing members of the Guavian Death Gang and Kanjiklub alike. Solo and the others escaped aboard Solo's recently-recovered ship, the Millennium Falcon, and Bala-Tik watched them depart. He ordered his men to inform the First Order that Solo had the droid aboard the Falcon. 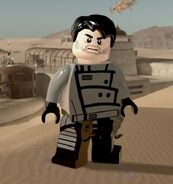 Bala-Tik's video game appearance.
Add a photo to this gallery