The Av-Matoran are the Matoran of Light. Several Av-Matoran were released in 2008, along with several Shadow Matoran that had their Light drained by the Makuta.

Av-Matoran were prototypes for the rest of Matoran. Their build was based on Agori build. They were stronger and bigger than their brothers. Also, they are the only Matoran that can use their elemental powers. The first Av-Matoran to be created was Takua, who later became Toa of Light. If it's written in his/her destiny, the Av-Matoran can become Bohrok.

Av-Matoran are similar to Toa that they unite with. They wear the same Kanohi masks, have the same color of armour, similar bulid and similar weapon:

However, Solek, Photok and Tanma share many similarities. They all have trans-neon green eyes, dark grey torso and other dark grey parts and they all have a jetpack. 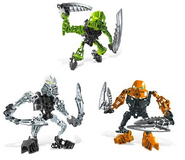 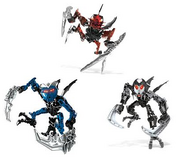 Retrieved from "https://lego.fandom.com/wiki/Av-Matoran?oldid=1938325"
Community content is available under CC-BY-SA unless otherwise noted.