This article is about the Prince of Persia minifigure. For the Jedi Padawan minifigure with similar spelling, see Ahsoka Tano.

Asoka is a minifigure in the 2010 LEGO Prince of Persia theme.

Asoka is an enemy of Dastan, but is Princess Tamina's best warrior (Dastan is not aware of this from the start). He has a Spear, a Gold Breastplate, and a new helmet piece. As seen on the 7571 Fight for the Dagger box art, Asoka has the Dagger of Time being flung out of his hand, as he had captured the Dagger to complete his assigned mission.

During the siege of Alamut City by the Persian army, as one of the trusted warriors of Princess Tamina, Asoka was ordered to bring the Dagger of Time to a secret location. While he was trying to leave the city, he met the Persian Prince Dastan. Dastan dueled Asoka, wounded him, and captured the Dagger of Time without knowing its true nature. 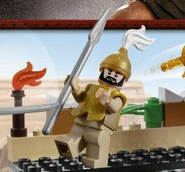