"By our master’s command, the Castle and the kingdom will be ours. None shall stop us!"
―Armoured Skeleton

Armoured skeleton is a Castle minifigure introduced in 2007. They are some of the Evil Wizard's special soldiers.

The Armoured Skeleton's legs are black and maroon. His body is black with white hands and an evil white skeleton head. He wears armour that consists of a breastplate with skull markings like the one of the Skeleton Queen, and a helmet like those of the Shadow Knights.

The Armoured Skeletons are some of the Evil Wizard's special troops. They are often seen riding horses. 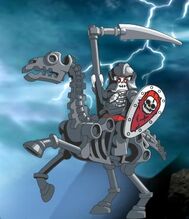 Add a photo to this gallery
Retrieved from "https://lego.fandom.com/wiki/Armoured_Skeleton?oldid=1883784"
Community content is available under CC-BY-SA unless otherwise noted.