"They learned that high-ranking World Security Council member Alexander Pierce had turned his back on Fury and was going to use Project Insight to allow Hydra to rule the world!"
―Agent 13 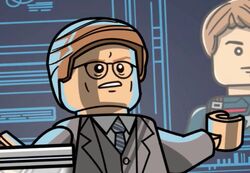 Alexander Pierce is a non-playlable charcter and a cutscene character appeared on LEGO Marvel's Avengers.

Alexander Goodwin Pierce was one of HYDRA's leaders and its top undercover operative inside the United States Government, S.H.I.E.L.D., and the World Security Council. He commanded the HYDRA forces within S.H.I.E.L.D., working to create a world so chaotic, that its people would give up their own control of their lives. To that end, he created Project Insight, a project that would have given HYDRA absolute control over the world. His plan was stopped by Captain America, Black Widow, Falcon, Maria Hill, and Nick Fury during the Battle at the Triskelion, in which he was killed by Director Fury.

Retrieved from "https://lego.fandom.com/wiki/Alexander_Pierce?oldid=1871051"
Community content is available under CC-BY-SA unless otherwise noted.