Akita is a Ninjago minifigure that depicts an alternate form of the character known as Lloyd's Wolf. She is a major character in the show and is a shapeshifter known as a formling. She has a brother named Kataru, however, he does not have a minifigure.

In wolf form, Akita's body is all white except for the red tips of her multiple tails, three red markings on each cheek, and black nose, eyes, and eyebrows. Her mouth has visible fangs jutting from it, and her head can be moved up and down. The rest of the body is, like most LEGO animals, completely rigid, frozen in a position with the tails extended straight out behind her. The legs are all in different positions, with her two left legs positioned close to each other while her right legs are spread further out, the right front leg extending further than the front left leg.

In minifigure form, Akita has unique printing on her legs and torso depicting white and red robes, with the white being more prevalent on her torso and the red more prevalent on her legs; her torso also features a circular black decoration with a yellow wolf head symbol. She comes with a split cloth cape, mostly white but with red tips, matching the multiple tales of her wolf form. Her head is printed on both sides, each print featuring three red marks on her cheeks matching those of her wolf face. One side features a tense frown, while the other depicts a cocky smile; both expressions show her teeth, which include fangs. She comes with a unique hairpiece depicting shaggy, shoulder-length black hair with a white wolf mask resting atop it. 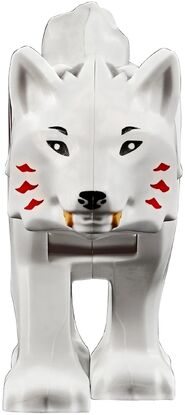 Her wolf form.
Add a photo to this gallery
Retrieved from "https://lego.fandom.com/wiki/Akita?oldid=1957191"
Community content is available under CC-BY-SA unless otherwise noted.