Ace the Bathound is a character that appears in LEGO Batman 3: Beyond Gotham. He was physically released in 2018.

Ace was the guide dog of a blind native American named Black Wolf, who just called him "Dog". After helping Batman against some criminals and Black Wolf's subsequent death, Batman adopted Dog and renamed him Ace.

Ace also known as Titus lives in the Batcave and sometimes helps in cases where his sense of smell is useful. He is very affectionate towards Batman. Occasionally, Ace will help Batman or Krypto (the Super-Dog) to fight crime.

Ace was originally used for illegal dog fights, until he escaped into the streets. He found Bruce Wayne, who was paying respects to his parents when one of the Jokerz attacked him. Ace saved Bruce, who took him to Wayne Manor.

At first, Ace disliked the new Batman, but they eventually warmed to each other. Occasionally, Ace helps the new Batman fight crime. 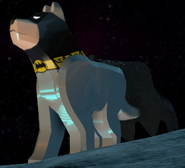 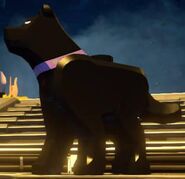 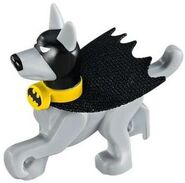 Add a photo to this gallery
Retrieved from "https://lego.fandom.com/wiki/Ace_the_Bathound?oldid=1926152"
Community content is available under CC-BY-SA unless otherwise noted.