The A-wing Pilot is a Star Wars minifigure first released in 2000. It has since been made in three variations, one of which was released in 2013.

The first variation of the A-wing pilot has mainly green torso with black hands. Printing of a grey and black pilot vest is on the upper section of the torso, with a belt located at the bottom. The hips are black and the legs green. The face of the A-wing pilot is smiling and has eyebrows and a microphone by the mouth. His helmet is mainly grey and has a yellow visor.

The second variant is very similar to the first, with the same helmet and general design. The face, however, is light nougat and is a simple smile, with no eyebrows or any other printing on it. In 2006, this minifigure had a dark transparent visor, whereas in 2009, it was included with a transparent yellow one.

The third variant, released in 2013, has parts depicting the equipment worn by A-wing pilots in Episode VI more accurately than its predecessors. It is a darker shade of green than the other two and has grey hands and white hips. The legs have printing of several loose white straps hanging over the thighs. The torso has a life support pack in the center over a vest. The face (the same as Samwise Gamgee's from Lord of the Rings) , while eyebrows are present, lacks a microphone. However, there is a microphone printed on the right side of the helmet. The helmet is a completely new mold and is grey and blue. It covers the entire head, excluding the facial features.

The fourth vairant released in 2016 is based on attire used on Rebels. Her torso and legs are grey and reuses the same face as Clara Oswald (from Doctor Who). She has the same helmet used on the previous variant.

A-Wing Pilots were members of the Rebel Alliance during the reign of the Galactic Empire. They were specially trained to pilot A-Wing Starfighters, a small, very speedy and maneuverable fighter. A notable pilot was Arvel Crynyd, who was Green Leader during the Battle of Endor, commanding a squadron of A-Wings. When Green Leader's fighter was hit, he angled his ship straight into the bridge of the Super Star Destroyer Executor, resulting in it's plummet to the Second Death Star were it exploded. 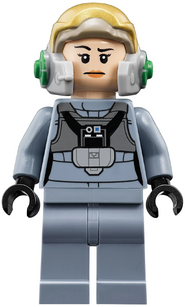