9674 Naboo Starfighter & Naboo is a Star Wars Buildable Galaxy series 1 set released in 2012. The set includes a Naboo Pilot minifigure, a mini Naboo Starfighter, and a micro-model of Naboo. It has 56 pieces.

The set includes 56 pieces, mainly in yellow, black, and light grey, which are used to build a mini-model of a Naboo N-1 Starfighter, a stand with an identification plaque, and a Naboo Fighter Pilot minifigure. The Naboo Pilot holds a blaster, and is placed on the stand next to the N-1 mini-model. The set also includes two joining Naboo planet pieces which can hold the disassembled model and minifigure, or can be hung with a piece on top and string.

The Naboo N-1 Starfighters were the sleek and fast starfighters of the planet Naboo's military. They were used in the Battle of Naboo.

In the battle of Naboo, Naboo N-1 Starfighters were used to attack the Droid Control Ship which, if destroyed, would shut down all Battle Droids and free the controlled planet of Naboo. Anakin Skywalker attempts to hide in the cockpit of one of the fighters, but the ship defaults to auto-pilot. The ship then brings Anakin to the droid control ship and, after finally disabling the auto-pilot, he destroys the vessel and saves Naboo. 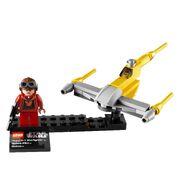 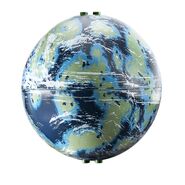 The pilot, planet and fighter
Add a photo to this gallery

Retrieved from "https://lego.fandom.com/wiki/9674_Naboo_Starfighter_%26_Naboo?oldid=1926422"
Community content is available under CC-BY-SA unless otherwise noted.