9571 Fangdam is a Ninjago spinner set released in May 2012. It contains Fangdam, a spinner, a spinner crown, a character card, four battle cards, a golden horned staff of control, a white viper (sly viper), a silver mace, two translucent red 1x2 bricks and a red 2x2 plate. The spinner is gunmetal and red with a translucent red spinner crown. 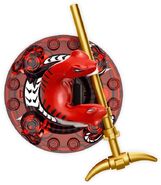 Fangdam on his spinner viewed from the top 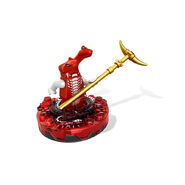 Fandam on his spinner
Add a photo to this gallery

Retrieved from "https://lego.fandom.com/wiki/9571_Fangdam?oldid=1885274"
Community content is available under CC-BY-SA unless otherwise noted.