The set includes a dark green Jedi Eta-2 Actis-class interceptor, a brick-built Mustafar mining droid, and a mining platform. The Interceptor is the main part of the set. It features an opening cockpit with room for one minifigure, a slot for an Astromech Droid (in this case, R2-D2), flick-fire missiles under the starboard wing, laser cannons, and opening s-foil wings. Five minifigures are included: Anakin Skywalker, Obi-Wan Kenobi, R2-D2, Nute Gunray, and a Security Battle Droid.

After Anakin Skywalker lost his yellow Jedi Interceptor aboard General Grievous' flagship, the Invisible Hand during the Battle of Coruscant, he stole a dark green Interceptor from the Jedi Temple and traveled to Mustafar to execute the Separatist leaders, thus ending the Clone Wars. Anakin then dueled his former master, Obi-Wan Kenobi, above Mustafar's lava rivers. 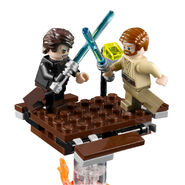 Anakin and Obi-Wan with sabers locked.

A shot of the cannons.
Add a photo to this gallery

Retrieved from "https://lego.fandom.com/wiki/9494_Anakin%27s_Jedi_Interceptor?oldid=1888427"
Community content is available under CC-BY-SA unless otherwise noted.