9470 Shelob Attacks is set in the theme The Lord of the Rings released in May 2012. The minifigures included are Frodo Baggins, Gollum and Samwise Gamgee. It consists of the spider Shelob and a small cave entrance, where Frodo went out of Shelob's lair. Samwise Gamgee is exclusive to this set.

Shelob is the focus of the set. She has eight legs, each of the same design, that have three joints each. These joints can be bent to 180 degrees at the farthest. At the tip of each leg is a curved black spike and at the base, where the legs are connected to the body, the legs can move side to side.

Shelob's head is composed of one piece that has printing of eight eyes on it: three on the sides and two on the front. The left eye on the front has the appearance of being damaged and squeezed shut. The mandibles are black and can move in a pincer-like fashion. They have white fangs at the tips.

The main body, the section the the legs are connected to, is smoother and rounder than the other sections. Only four visible studs are presented, as are four black spikes.

Shelob's abdomen is easily the largest section of her body. It is in the shape of half an oval and is black on top and brown underneath. It is connected to the front section by way of a joint and can move slightly in each direction, excluding forward and backwards. Inside of the abdomen are some gears and a wound-up white string depicting her web. When pulled, the string gives the appearance of web being produced by the spinnerets. The "web" can also be retracted by turning a gear located underneath the abdomen.

The other section of the set is a small cave entrance. It is just large enough for Gollum to fit in and has two earth green plant parts attached; one above the entrance and one below. Also connected to the cave is a small catapult that one can place Gollum on to launch him into the fray.

The set includes three minifigures: Frodo Baggins, Samwise Gamgee and Gollum. Sam is completely exclusive to the set and the snarling expression Gollum wears is only present on the variation in this set. In the other set he appears in, 79000 Riddles for the Ring, he sports a slier expression. In this regard, he, too is exclusive to the set. Frodo and Sam both have the new "Hobbit" hairpiece. Frodo's is dark brown while Sam's is a lighter colour. Frodo has standard Hobbit clothing: a button down shirt under a coat and cloak. Sam is in more practical clothing, with a supplies pouch and belt. Gollum is a light nougat hunched-over figure, with printing of a snarling face and a loincloth.

When Frodo and Samwise, two companions on their way to Mordor to destroy the One Ring, encountered the creature Gollum, he agreed to help them. Gollum, who had been to Mordor once before, secretly coveted the Ring for himself and planned to betray them. He then became their guide. After framing Sam, who suspected Gollum's treachery, the latter effected Sam's departure from the group. He led Frodo up into a tunnel where he knew the giant spider Shelob lived, hoping Frodo would be eaten and Gollum could then take the Ring for himself. Frodo, however, managed to escape the tunnels of Shelob's lair. Furious, Gollum attacked Frodo, leaping on him and grappling with him, but Frodo managed to throw Gollum off and over the side of a cliff. He continued on his way to Mordor, even as Shelob snuck up on Frodo. Using her stinger, knocked him unconscious and began to wrap him in web. But Sam, who had realized what Gollum had done, came back. After a duel with Shelob, a duel that cost Shelob her eye and her pride, Sam was victorious.

The set on display at a toy fair 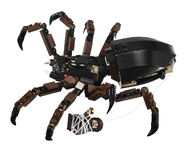 Shelob wrapping up Frodo with string

A CG rendering of the set

The box and instructions image

The back of the box
Add a photo to this gallery

Retrieved from "https://lego.fandom.com/wiki/9470_Shelob_Attacks?oldid=1694836"
Community content is available under CC-BY-SA unless otherwise noted.