8918 Carapar is a BIONICLE set released in 2007. He is one of the Barraki. He has a claw on one hand (in the BIONICLE universe he had two but, the other one was currently detached) and a Squid Launcher in the other. There are two holders for Sea Squid on his left shoulder. He is brown and yellow with red eyes.

In the BIONICLE universe, he commanded an army of Keras and Pit War Tortoises. He was often hypnotized by Takadox. He also appeared in the story Federation of Fear where he joined Brutaka and several others to find Miserix. Carapar was once one of the six warlords that controlled the Matoran Universe, but was brought down and thrown into The Pit, an underwater prison guarded by Hydraxon, until the pit collapsed, and they all broke free. They were transformed by mutagen, into a group of sea monsters, and sought to reclaim their old lives. He died trying to kill Tren Krom, when a beam of energy shot from the entity's eyes and shattered him. 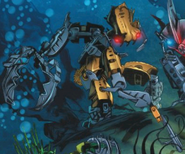 Carapar in the comics
Add a photo to this gallery

Retrieved from "https://lego.fandom.com/wiki/8918_Carapar?oldid=1938338"
Community content is available under CC-BY-SA unless otherwise noted.